Explore how grief and loss can evolve through imagination, artistic practice, and ceremony.

We spotlight visual artists and performers who share rituals and reflective practices to move through adversity.

There are no upcoming events 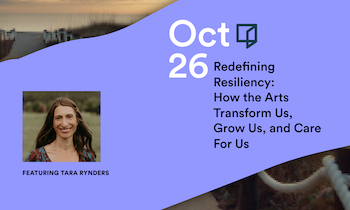 Redefining Resiliency: How the Arts Transform Us, Grow Us, and Care For Us

Join Tara Rynders, Executive Artistic Director of The Clinic in an arts and play-based workshop that honors you as a resilient and brilliant human being. Together let’s redefine the meaning of resiliency and look at all the ways we care for ourselves and collectively care for one another. Through simple artistic exercises of drawing, movement, and storytelling we will create, remember, and share our brilliant selves through art and transformation.

Tara Rynders RN, MFA, BSN, BA has been a registered nurse for over twenty years and currently works as a clinical nurse educator and researcher at two hospitals in Denver, Colorado. Rynders has a Bachelor’s degree in Nursing, a Bachelor’s degree in Spanish, and a Masters in Fine Arts in Dance with a specialization in Movement and Somatic Practices. Rynders, an advanced grief recovery specialist, is the founder and artistic director of The Clinic, an arts and play-based company that provides workshops, performance, and research around burnout and secondary traumatic stress. Rynders is extremely honored to have received the following awards: 2022 EY Next Wave Leader Award, 2022 Fulbright Specialist in the Netherlands, 2021 Mara Mogensen Lectureship awarded by the Oncology Nursing Foundation, 2019 A Blade of Grass Fellowship, 2019 Colorado Regional Nightingale Luminary award, and the 2019 National Organization for Arts in Health Hamilton Award for Arts in Resiliency.

Rynders believes that her work as a nurse, artist, and performer are symbiotically intertwined and are not as different as one would think. Drawing from the intimacy and vulnerability found in her work as a registered nurse, Rynders creates authentic connections through performance that allow guests to feel seen, heard and inspired to create alongside her. She does this through workshops and large scale immersive performances in site-specific locations, and most recently returned from the Netherlands as a Fulbright Specialist sharing best practices and facilitating workshops around wellness and resiliency in multiple healthcare systems. 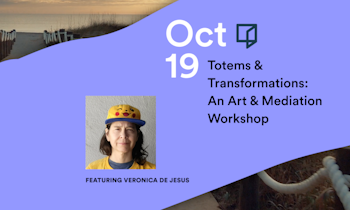 Hosted by Reimagine
Artist Veronica De Jesus leads a visual art and meditation exercise for people seeking to transform grief and loss into a totem for transformation and growth.

Visual artist Veronica De Jesus will guide participants - of all levels of experience and skill – in the creation of a unique figure that allows for insights into one’s experience of grief and loss. Veronica will share stories about her family and her Taino ancestors from Morovis, Puerto Rico. Using her paper template of Batman which can be downloaded in advance (see link below), Veronica will guide participants in the creation of a Batman totem to be used as a tool for transformation, meditation or healing, and to connect with ancestors and mentors. Batman is a trauma survivor and a superhero without superpowers who seeks purpose and justice. Veronica’s Batman totem is her father, the descendent of jíbaros or farmers. Your unique Batman can be anything you want it to be.

Please watch this orientation and demonstration video in advance of the workshop.

Card Stock paper or heavier paper is recommended but not required

Your choice of drawing and or painting supplies. One set of color pencils will work great or some colored pens. One pencil or pen is always nice to have handy.

One small ruler or something with a straight edge

Veronica De Jesus illustrates life as an American, in all its varied splendor. Drawing on pop culture icons, sports, heroes and villains, and more, she draws our complex world into focus. Her work also explores identity and the ways we hide and reveal elements of our personalities.

De Jesus earned a Bachelor of Fine Art degree from San Francisco Art Institute and a Master of Fine Arts degree from the University of California, Berkeley. She was raised in several American cities and is currently based in Los Angeles, California. http://www.veronicadejesusart.com/ 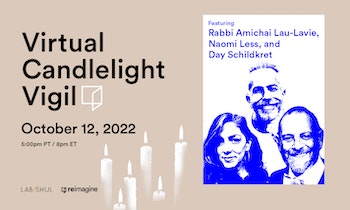 Reimagine has been hosting candlelight vigils throughout the pandemic in order to break down taboos and hold space for all that we've lost. This special vigil, co-hosted with Lab/Shul, an everybody-friendly, artist-driven, God-optional, experimental community for sacred Jewish gatherings based in NYC and reaching the world. Guests include Day Schildkret – a 2019 Lab/Shul Artist-in-Residence, a Reimagine festival collaborator, and author of the new book Hello, Goodbye: 75 Rituals for Times of Loss, Celebration and Change – with Lab/Shul’s co-founders Rabbi Amichai Lau-Lavie and Naomi Less. Day, Amichai, and Naomi will share insights on how grief and loss evolve through imagination, artistic practice, and ritual. The Vigil coincides with the harvest holiday of Sukkot and kicks off Reimagine’s October series that explores creative expression through the lens of post-traumatic growth.

Rabbi Amichai Lau-Lavie (he/him) is the Founding Spiritual Leader of Lab/Shul NYC and the creator of Storahtelling, Inc. An Israeli-born Jewish educator, writer, and performance artist, he received his rabbinical ordination from the Jewish Theological Seminary of America in 2016. Rabbi Amichai is a member of the Global Justice Fellowship of the American Jewish World Service, a founding member of the Jewish Emergent Network, serves on the Leadership Council of the New York Jewish Agenda, the Advisory Council of the International School for Peace – a Refugee Support Project in Greece, a member of the Advisory Council for the Institute for Jewish Spirituality, and is a faculty member of the Reboot Network. Rabbi Amichai has been hailed as “an iconoclastic mystic” by Time Out New York, a “rock star” by the New York Times, a “Judaic Pied Piper” by the Denver Westword, a “maverick spiritual leader” by The Times of Israel and “one of the most interesting thinkers in the Jewish world” by the Jewish Week. In 2016 The Forward named him one of the thirty-two “Most Inspiring Rabbis” in America, and in 2017 he was top five on “The Forward 50,” their annual list of the most influential and accomplished Jews in America. In June 2017 Rabbi Amichai published the JOY Proposal, offering a new response to the reality of Intermarriage and taking on a personal position on this issue, including his resignation from the Rabbinical Assembly of the Conservative Movement. Amichai is Abba to Alice, Ezra and Charlotte.

Day Schildkret is internationally renowned as the author, artist and teacher behind the Morning Altars movement, inspiring tens of thousands of people to make life more beautiful and meaningful through ritual, nature and art.

With nearly 100K followers on social media and sold-out workshops, installations, trainings, and public speaking events worldwide, BuzzFeed calls Day’s work, “a celebration of nature and life.” Day has worked for close to two decades with thousands of individuals, communities and organizations to help heal the culture through a meaningful and creative response to marking personal and collective change.

Day is the author of Hello, Goodbye: 75 Rituals for Times of Loss, Celebration and Change (Simon Element/Simon & Schuster) which hit Amazon’s #1 book in three categories, as well as, Morning Altars: A 7-Step Practice to Nourish Your Spirit through Nature, Art and Ritual (The Countryman Press/W.W. Norton). He is also the founder and principal instructor of the Morning Altars Practitioner & Teacher Training.

Day has taught workshops and created installations at Google, The 9/11 Memorial Plaza, The Hammerstein Ballroom, The Andy Warhol Foundation, California Academy of Sciences, Esalen, and many others.

His work has been featured on NBC, CBS, Buzzfeed, Vice, Well+Good, My Modern Met and four times in Spirituality & Health Magazine.

The Lab/Shul community is dedicated to exploring, creating and celebrating innovative opportunities for contemplation, life cycle rituals, the arts, life-long learning and social justice. Lab/Shul seeks to redefine the role of sacred gatherings that nourish our thirst for meaning, connection, spirituality and community. It is a thriving, nurturing spiritual community where inclusive, accessible and radically renewed Jewish ritual promotes deep communal connection and broader societal shift. As a pioneer in redefining the role of sacred gatherings, Lab/Shul visualizes itself as a model for other spiritual communities and a catalyst for global change. https://labshul.org/