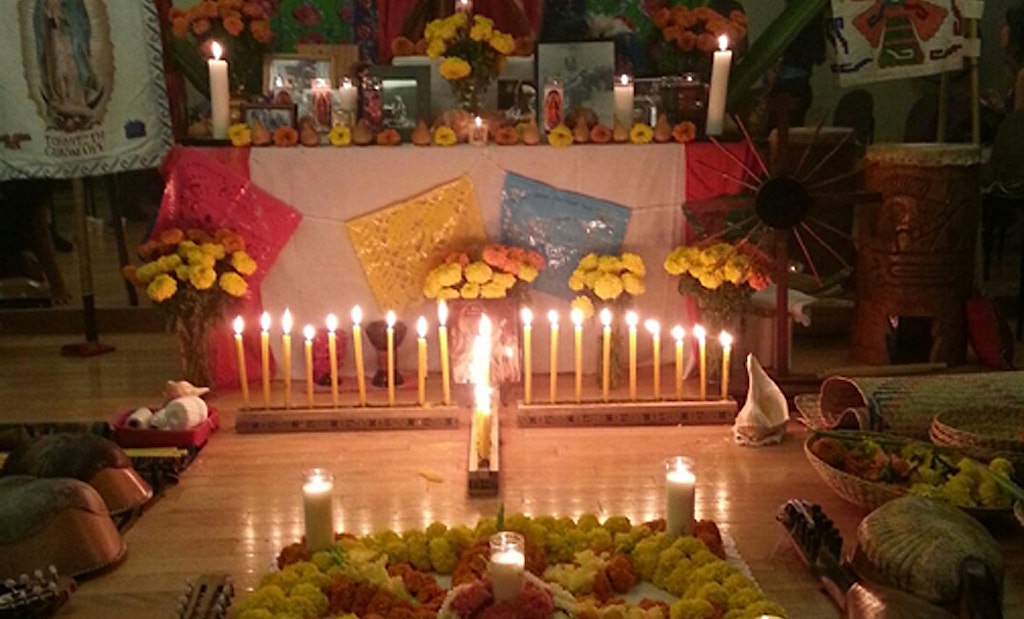 Reimagine audiences are welcome to attend this all-night vigil in conjunction with Mexican Day of the Dead with offerings for departed loved ones.

Each ceremony - a union in forms and beliefs of ancient Mexico and Catholicism - is a time of renewal, of initiating new cycles within larger cycles. It is the common belief that the souls/spirits do in fact arrive to mingle ephemerally with the living. Thus the ceremony features a beautiful altar with flowers, food, drink, mementos, photos. Soft singing and music accompany the night, as we create a flower offerings for the departed. The vigil is a form of sacrifice, of overcoming fatigue, or of setting aside our personal afflictions for something greater than ourselves – the Divine in its infinite manifestations.

The sacred calendar of the Aztec Dance Atl Tlachinolli of the Virgen de Guadalupe follows a calendar based on what is popularly known as The Four Winds (i.e., the four cardinal points, the four principal elements, or the four points of the ancient cross.) It also relates to the agricultural calendar in Mexico: the preparation of the land for the arrival of the rainy season, laying the first seed, cultivating the crop, and the harvest. The vigil culminates with a solar ritual dance which is the light of a new day that overcomes darkness. The combination of the two, vigil and dance, completes the circle. Our community celebrates bringing to life on this side of the border a tradition that goes as far back as the first immigrants to this continent – several thousand years! The event is free and open to the public for the duration of the ritual or for a shorter period in the morning. Anyone can bring an offering or photograph of a loved one.

The event will be held in the Judson Memorial Church Meeting Room. Entrance at 243 Thompson St. at Washington Square South.

Note that filming parts of the ceremony is not permissable.