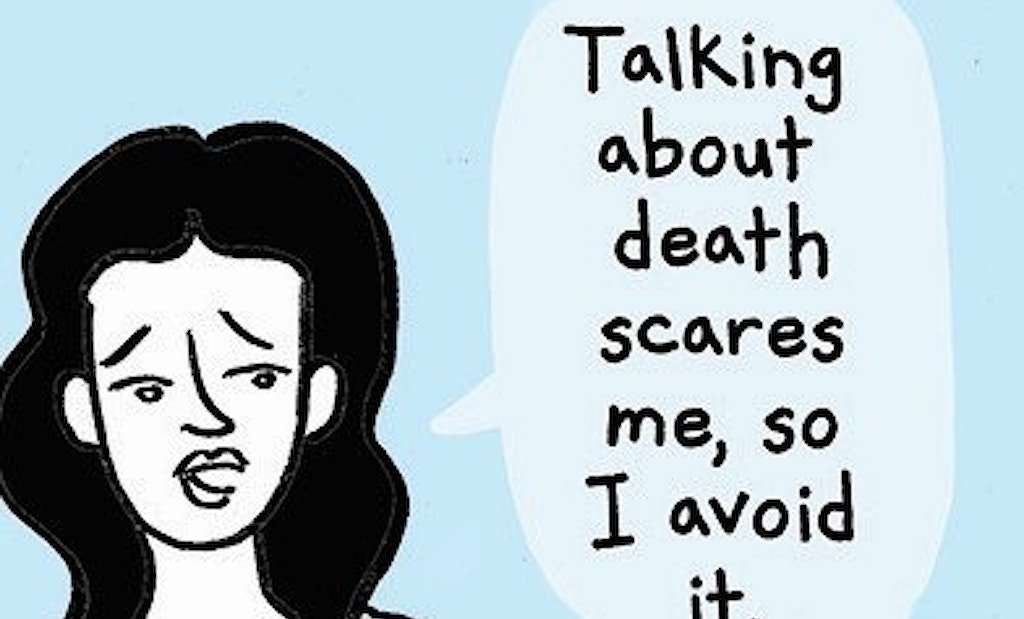 A panel discussion of the Art in the Death Panels exhibit with some of the artists who created it.

- Benjamin Schwartz has been a contributing cartoonist for the New Yorker since 2011. He is also an assistant professor of medicine at Columbia University Medical Center, where he teaches classes on visual storytelling as part of Columbia's Narrative Medicine program.

- Pat Arnow is a photographer for labor unions and a cartoonist in New York. The purposeful death of a neighbor and the community that rose to support her inspired Pat to draw a comic of the story featured in the exhibit. It is one of a series of her comics about the hardships, humor, and grace of friends facing illness and death.

- Isabella Bannerman is the Monday artist for the syndicated daily comic strip, “Six Chix.” She has won awards from The National Cartoonists Society, The Newswomen’s Club of New York, and The Union of Concerned Scientists. Her 5 page graphic interview, “Palliative Care,” was published in 2013, in the 45th issue of the anthology-style progressive comic book, “World War 3 Illustrated.”

- Emily Flake is a cartoonist, writer, illustrator and performer living in Brooklyn, NY. She is a frequent contributor to the New Yorker and the author of a book of cartoons and essays about parenting called Mama Tried: Dispatches from the Seamy Underbelly of Modern Parenting.

- Panel moderator Marsha Hurst is a Lecturer in Narrative Medicine at Columbia University, where she teaches a course on “Narratives of Death, Living and Caring at the End of Life.” She co-founded an ongoing monthly workshop (open to all) on Graphic Medicine at Columbia, and a University Seminar on “Narrative, Health, and Social Justice,” which will be co-sponsoring the “A Funny Thing About Death: Using Humor and Narrative to Tackle a Taboo” later in the week. She has been involved as an advocate and educator in end of life issues for much of her career.