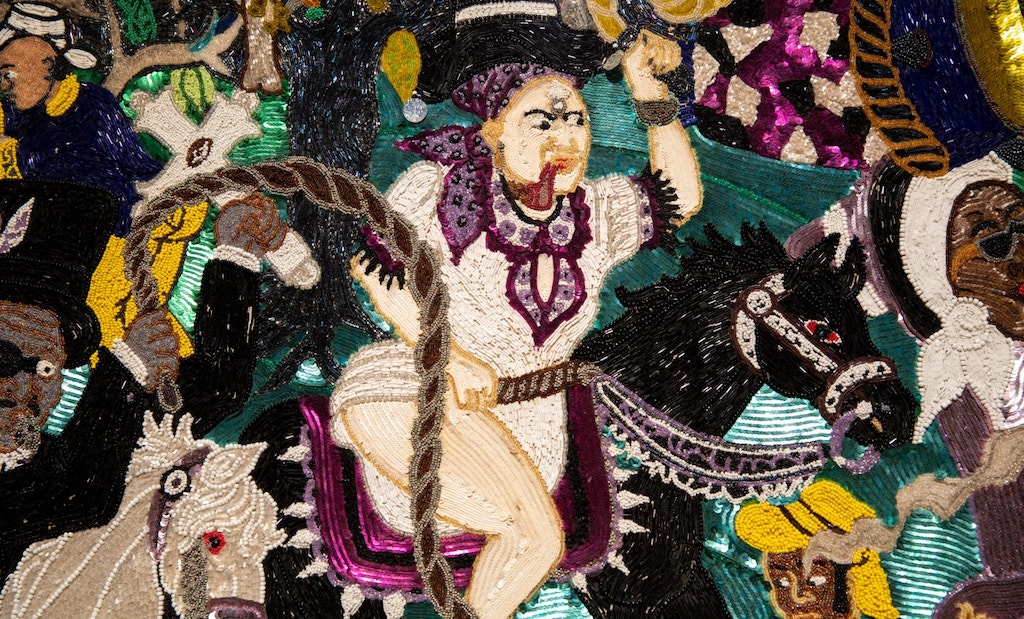 On the occasion of PÒTOPRENS: The Urban Artists of Port-au-Prince, Pioneer Works dedicates a night to Haitian Vodou and Gede, the ancestral dead, with a Fet Gede. The Pioneer Works Fet Gede includes live DJ sets by Val Inc. and DJ Sabine, a dance performance by Sheila Anozier, as well as a full ceremony.

On the occasion of PÒTOPRENS: The Urban Artists of Port-au-Prince, Pioneer Works dedicates a night to Haitian Vodou and Gede, the ancestral dead, with a Fèt Gede. Fèt Gede, Haiti’s Day of the Dead, is typically celebrated during the first few days of November replete with altars, veves (ground drawings made to attract the gede), special food and drink offerings, and, most importantly, sacred dances and polyrhythmic drumming. Every ritual performed and offering made during a gede fest is geared toward attracting the lwa (spirits) of people who have died to celebrate with their living descendants. The rituals and offerings also honor particular lwa such as Papa Legba, Baron Samedi, and Mama Brigit to name only a few.

In addition to the visually stunning veve tracings, elaborately constructed altars, and specially prepared foods for the gede, music, drumming, and dance performances are rituals that are central to Vodou ceremonies. Since the gede are said to be the liveliest of all the lwa, the polyrhythmic sounds and fast-paced movements of the dancers are used as further attractors for them to manifest themselves here in the realm of the living. Each and every sacred object and performance is an invitation for the gede to travel to this realm as well as to honor and celebrate them.

The Vodou-inspired artworks included in PÒTOPRENS highlight the extent to which the religious practice inspires and feeds Haiti’s artists. A gede fest further highlights this link between Vodou and art by activating the object’s divinity. The Pioneer Works Fèt Gede also includes live DJ sets by Val Inc. and DJ Sabine, a dance performance by Sheila Anozier, and a full ceremony. Starting at 10pm, the ceremony will be led by Jean-Daniel Lafontant.

This program is co-curated with Haiti Cultural Exchange.

Haiti Cultural Exchange was established to develop, present and promote the cultural expressions of the Haitian people. We seek to raise awareness of social issues and foster cultural understanding and appreciation through programs in the arts, education and public affairs.