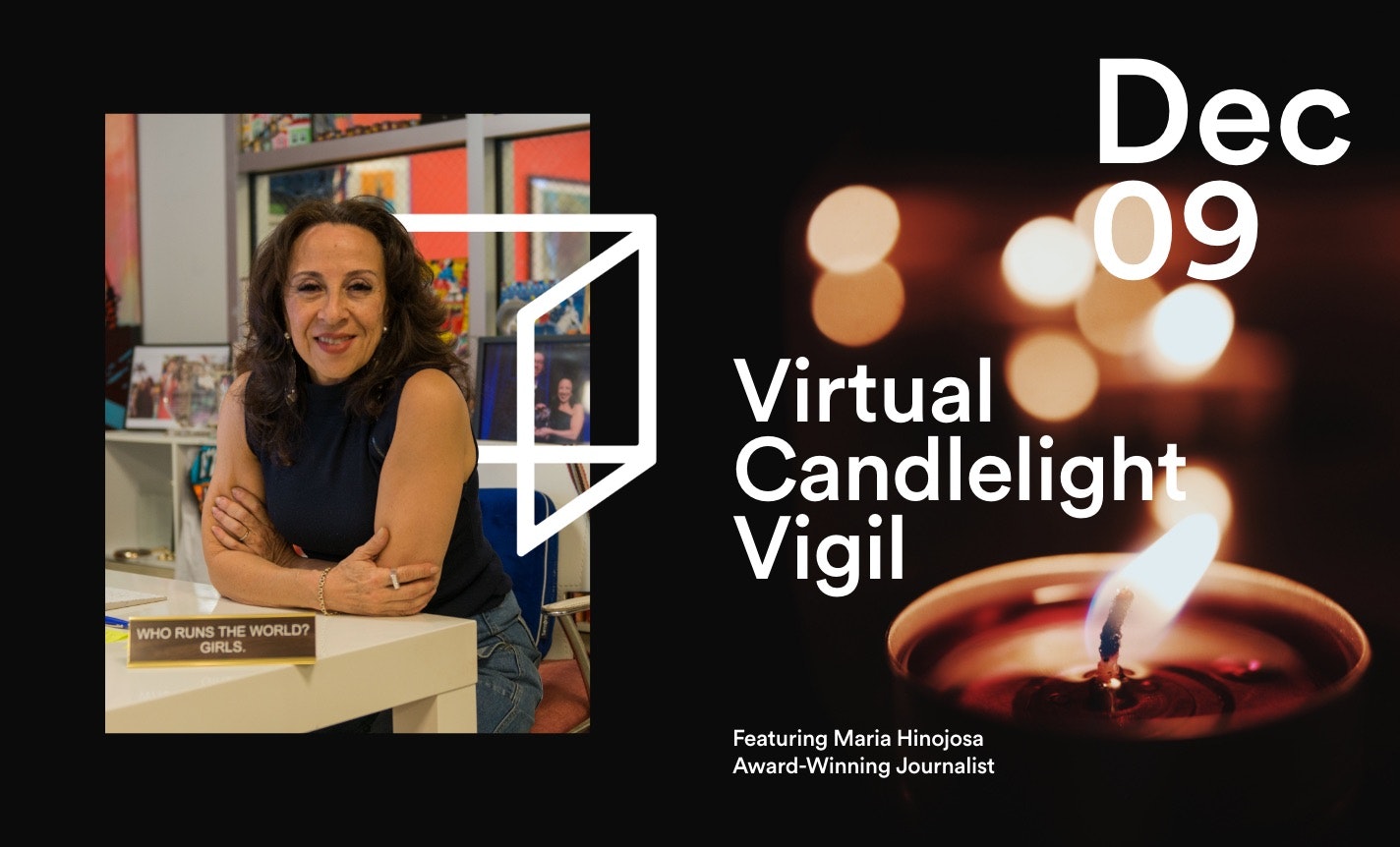 At this month's Reimagine Candlelight Vigil, let's honor our loved ones and celebrate the transformation of loss into creativity and action with award-winning journalist and author Maria Hinojosa.

Reimagine has been hosting candlelight vigils throughout the pandemic in order to break down taboos and hold space for all that we've lost. At this gathering, Maria Hinojosa will describe her emergence from personal losses, the experience of grief from an immigrant perspective, and how pain and trauma can make us more demanding and exacting of the country we love. She will be joined by Rashida Sanchez, a bereavement counselor who provides grief support through a social justice lens, and Aditi Sethi, a hospice/palliative medicine physician and musician.

As the Anchor and Executive Producer of the Peabody Award-winning show Latino USA, distributed by PRX, as well as Co-Host of In The Thick, Futuro Media’s award-winning political podcast, Hinojosa has informed millions about the changing cultural and political landscape in America and abroad. She is also a contributor to the long-running, award-winning news program CBS Sunday Morning and a frequent guest on MSNBC.

Hinojosa’s nearly 30-year career as an award-winning journalist includes reporting for PBS, CBS, WNBC, CNN, NPR, and anchoring the Emmy Award winning talk show from WGBH Maria Hinojosa: One-on-One. She has won dozens of awards, including four Emmys, the John Chancellor Award, the Studs Terkel Community Media Award, two Robert F. Kennedy Awards, the Edward R. Murrow Award from the Overseas Press Club, and the Ruben Salazar Lifetime Achievement Award from the NAHJ. She has been honored with her own day in October by New York City Mayor Bill de Blasio and has been recognized by People En Español as one of the 25 most powerful Latina women. Additionally, Hinojosa was the first Latina to anchor a PBS FRONTLINE report: “Lost in Detention” which aired in October 2011 and was the first to explore abuse at immigrant detention facilities, garnering attention from Capitol Hill as well as both the mainstream and Spanish-language media.

As a reporter for NPR, Hinojosa was among the first to report on youth violence in urban communities on a national scale. During her eight years as CNN’s urban affairs correspondent, Hinojosa often took viewers into communities rarely shown on television and continued that work longform on Now on PBS. At Futuro Media, Hinojosa continues to bring attention to experiences and points of view that are often overlooked or underreported in mainstream media, all while mentoring the next generation of diverse journalists to delve into authentic and nuanced stories. In 2018 she was a Fellow at Shorenstein Center at the Harvard Kennedy School and is a frequent speaker across the country. In 2019, she was named the inaugural Distinguished Journalist in Residence at her alma mater, Barnard College.

Her most recent book is Once I Was You: A Memoir of Love and Hate in a Torn America.

Rashida Sanchez, MA, MSW, FT is a bereavement counselor at Calvary Hospital, the country’s only hospital dedicated to providing hospice and palliative care to adult patients with advanced cancer and other life-limiting illness. She is a certified Fellow of Thanatology through the Association of Death Education and Counseling. As a first-generation Haitian American, Rashida is passionate about viewing grief from immigrant and social justice perspectives. Her research incorporates the experiences of children and adolescents, immigrant populations, and faith communities. As a Reimagine Collaborator, she has presented at Reimagine events such as "Grief Through an Immigrant Lens: The Duality of Secondary Losses."

Aditi Sethi, MD, is a hospice and palliative medicine physician who has spent the last 10 years working in an inpatient hospice setting. She trained as a death doula and is executive director of Center for Conscious Living and Dying. She is also an Indian devotional and American folk musician. Aditi performs ceremonial grief concerts with her group "The Gate Keepers" both in person and on Reimagine’s virtual platform. She lives in Black Mountain, NC with her husband, Jay, and their three precious children.