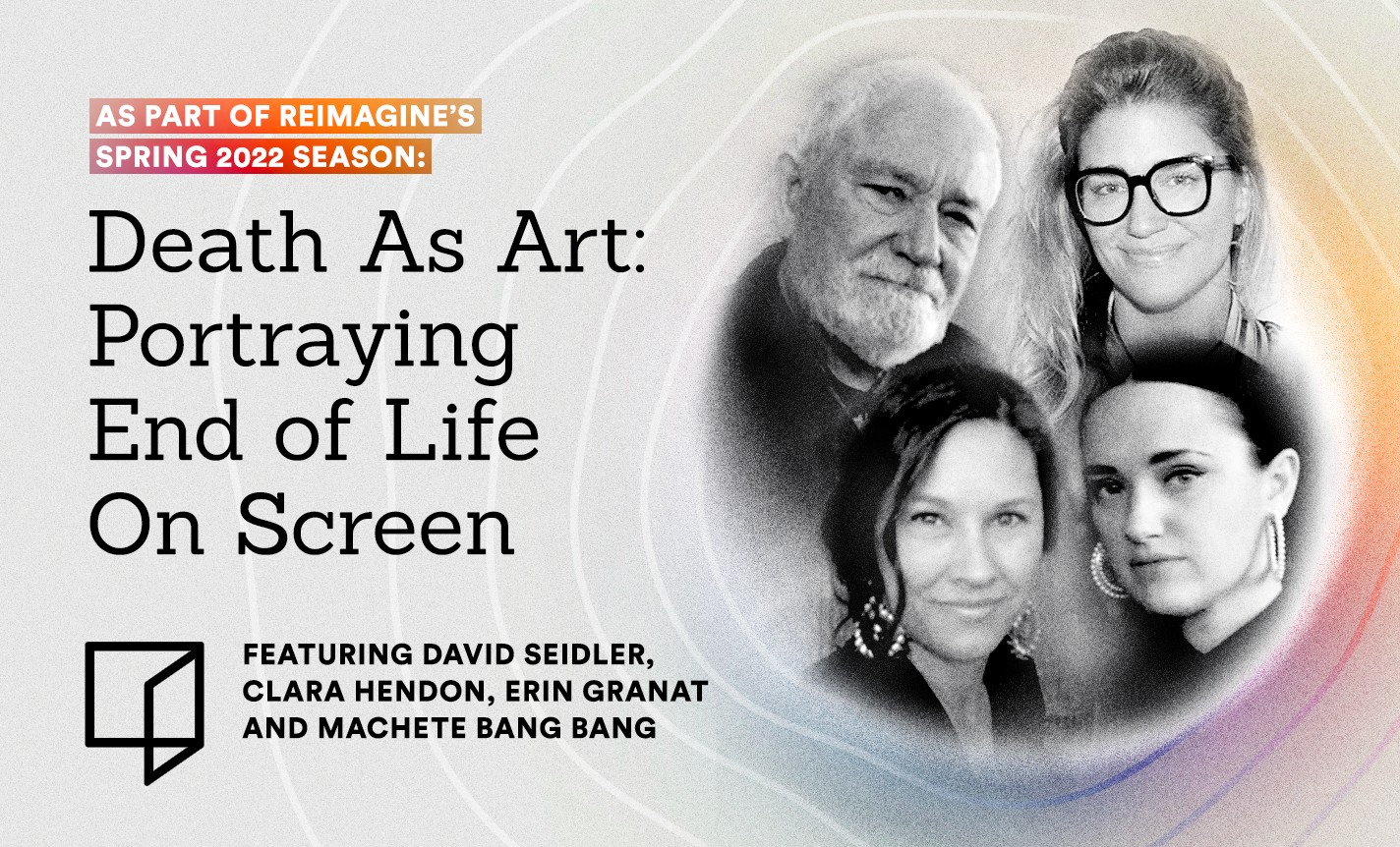 Can death be art? And how does the powerful medium of film help or hinder how we process death after watching it hundreds of times on screen? Oscar-winning writer David Seidler & filmmaker Clara Hendon, creators of The Death Project, use their lens to ask spiritual, religious and cultural leaders their personal viewpoints on the topic of death. Filmmakers Erin Granat & Machete Bang Bang wrote and directed the feature film Moon Manor based on the stories of their 84-year-old muse and dear friend Jimmy Carrozo, creating a hybrid of his real stories and a fictional narrative to create the vision of his last day alive, in which he celebrates himself with a FUNeral before facing his curated death.

Both projects not only dig deep into the acceptance of death, but ask the question, "what makes a good death?" Other topics explored will be how to honor our queer elders, how to accurately portray end-of-life workers on screen, and the sacred assignment of spearheading projects that explore death past the gatekeepers of Hollywood.

Join the filmmakers for this vibrant virtual roundtable to learn more about their inspirations, the responsibilities of portraying death on screen, and if death can be art, while they still have life.

To prepare for our conversation, please watch the following:

With advancing Alzheimer’s and a determination to do things his way, 80 year-old Jimmy has decided to throw himself a fabulous FUNeral before his intentional death. MOON MANOR takes place in one day - Jimmy’s last day alive - throughout which he’s visited by a cosmic being only he can see, a novice obituary writer, his sharp-witted death doula, estranged brother, salt-of-the earth caretaker, and various FUNeral guests, showing them that sometimes the art of living just may be the art of dying.

Touching on topical issues like the positive death movement, living with HIV, dying with Alzheimer's, and celebrating a queer love story for the ages, MOON MANOR’s cast represents diverse backgrounds and depicts death as something to be embraced rather than feared. MOON MANOR is co-written and co-directed by the female filmmaking duo and lifelong friends KnifeRock, comprised of Erin Granat & Machete Bang Bang.

The score marks the first original score by Coldplay producers Rik Simpson and Dan Green of “The Dream Team.” Additional music by M83's Joe Berry and featuring (for the first time on film) original songs written by James “Jimmy” Carrozo and his longtime partner Ricky Granat, who passed away in 1986. Ricky Granat was the uncle of filmmaker Erin Granat, Erin grew up knowing Carrozo as her “honorary” uncle. Inspired by the real life stories of Carrozo, MOON MANOR won a grant from end-of-life non-profit Reimagine, was the recipient of the ScreenCraft Film Fund, and was an official selection of dozens of festivals including Newport, Whistler, Portland, Atlanta, Seattle Queer and London Queer, and was shortlisted for Venice Film Festival's Giornate degli Autori.

When David Seidler and Clara Hendon met at the Sun Valley Film Festival in March of 2016, an unlikely friendship formed around an unlikely topic: death. They soon discovered that both felt that our culture was suffering in a multitude of ways because of this great taboo and decided to join forces to create a documentary series addressing this head on. Seidler, famed for his Oscar winning script The King’s Speech, and Hendon with 20 years of marketing and sales under her belt, found that together they made a sympatico production duo with a mutual interest in creating change through storytelling. Their company, Studio Seven 13 (both are born on July 13th), is currently developing: The Death Project – a documentary that addresses the fears of our death phobic society, exploring the topic through the perspectives of spiritual, religious and cultural leaders and icons and integrating music, art, popular culture and conversation; The Voyage of Naomi James - the epic love story of the first woman to sail single-handed around the world and her husband who drowned at sea, yet their love continued; Won’t Be Silent - a documentary series exploring protest songs throughout the world performed by musical heroes who have impacted humanity’s past, present and tomorrow; The Reincarnation of Timothy Leary - a documentary feature about the life of Timothy Leary, narrated by Timothy Leary; Battle Royal, the journey of two royal princes King Edward VIII and George VI from childhood friends to bitter adult enemies, and their battling wives – sounds familiar, a story ripped from today’s headlines, but it happened ninety years ago and the stakes couldn’t have been higher, with Hitler in the wings eager to use the British royal family feud to further his quest for world domination.

Erin Granat's debut feature as writer-director is MOON MANOR, co-created as one half of female filmmaking duo "KnifeRock." The film is streaming on Showtime beginning summer 2022, distributed by Good Deed Entertainment. The MOON MANOR screenplay was recently selected for the Academy of Motion Picture’s Permanent Core Collection for its representation of queer, senior, and ethnically diverse points of view. The “comedy about death” stars Lou Taylor Pucci, Ricki Lake, Debra Wilson, Gayle Rankin and Whitmer Thomas, features the first original score by Coldplay producers The Dream Team, was selected for dozens of festivals including Newport, Whistler, Portland, Seattle Queer and London Queer, and was shortlisted for Venice Film Festival's Giornate degli Autori.

Originally from rural Nevada, Erin's screenplays have been finalists at the Austin Film Festival Screenplay Contest and the ScreenCraft Feature Competition, and she was a finalist for CRAFT Literary’s 2021 Creative Nonfiction Prize. Her films have been selected by HollyShorts, Atlanta Film Festival, and Marfa Film, among others. Erin is a contributing writer and photographer at Flaunt, Uproxx and Billboard. As one half of “KnifeRock,” her collaboration with Machete Bang Bang, Erin recently spent several months with the band Coldplay documenting the creation of their album “Every Day Life,” including their livestream album release in Amman, Jordan (a YouTube production).

Machete Bang Bang has worked in the film industry as a filmmaker for over 12 years. After receiving her B.F.A. in Musical Theater from the New School University in NYC and many years of performing on stage and screen, she evolved to take stake behind the camera. Her language of the film medium covers a broad range. Mainly known as a writer/director, she also works as a producer, photographer, editor and assists in casting. Her creative approach and work ethic has landed her many opportunities with artists and brands such as Coldplay, Jeff & Emilie Goldblum, Evan Rachel Wood, St. Paul & The Broken Bones, Lucius, Nike, Google, YouTube, Disney+ and many more. Self-taught, she swiftly began receiving recognition for her work, including being selected for a Vimeo Staff Pick, acceptance to film festivals such as Slamdance, Napa Valley Film Festival, Marfa Film Festival, with premieres in Rolling Stone Magazine, Amy Poehler's Smart Girls, Paper Magazine and is the recipient of the Lindsey Film Festival Vanguard Award for her short film “Confetti.” Her first feature film titled Moon Manor, co-created with childhood best friend Erin Granat, is currently distributed in North America on Amazon, iTunes, Google Play, etc and stars Lou Taylor Pucci, Debra Wilson, Richard Riehle, James Carrozo and Reshma Gajjar. She is currently working on an untitled UFO musical screenplay that centers around climate change. For a deeper dive into her work, head to her site at www.machetegoesbangbang.com.