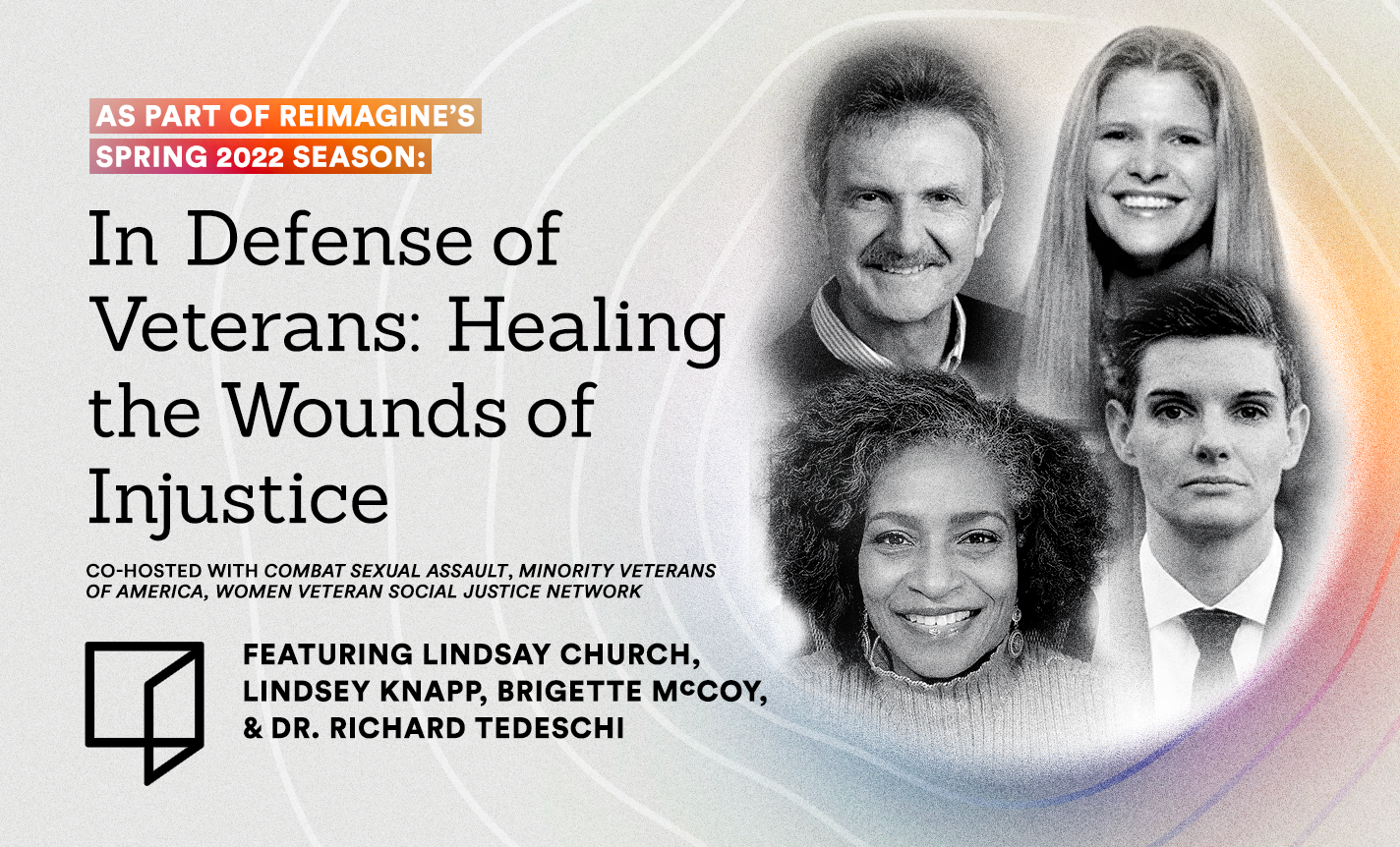 Free
How are veterans healing, growing, and transforming through service, advocacy, and activism? How can we provide wholeness, safety, and well-being even in the absence of justice?

Those who serve in the military arguably perform some of the greatest acts of service on behalf of others. Many veterans, particularly those who served proudly in combat, note that their experiences in war strengthen them personally. At the same time, military service leaves physical and emotional scars, not only from battle but also from discrimination and other injustices experienced within the ranks. And to overcome those adversities after transitioning to civilian life, many veterans continue to provide service and advocacy in areas such as criminal justice, addiction, and sexual assault. For those who fight for equity both inside and outside the military, there is a universal desire to ensure that all feel safe, whole, and honored regardless of race, religion, sexual orientation, and gender identity. This discussion, moderated by Richard Tedeschi, PhD, Distinguished Chair of the Boulder Crest Institute for Posttraumatic Growth, will explore possibilities for growth and transformation for veterans.

This program is part of a series produced in conjunction with Reimagine’s spring 2022 season Grief, Growth, and Justice: a group of workshops, talks, and conversations that explore the intersection of justice with post-traumatic growth, a body of research demonstrating that those who experience adversity and loss can achieve personal strength, optimism, meaningful relationships, appreciation of life, and spirituality. Featuring guest speakers from diverse fields such as psychology, organizational development, art, and activism, the series examines how volunteerism, civic engagement, activism, and other acts of service and justice can facilitate growth and healing on both personal and collective levels. Reimagine’s organizational partner Holistic Underground has provided this guiding principle of justice: "a state of integrity and wholeness, achieved through healing and transformation. When justice is present, we can trust that our safety and well-being are valued in a community or society."

Lindsay Church (they/them) is the Executive Director and Co-Founder of Minority Veterans of America, a non-partisan, non-profit organization dedicated to creating an equitable and just world for the minority veteran community – veterans of color, women, LGBTQ, and (non)religious minorities. Lindsay has nearly a decade of experience rooted in veteran’s advocacy and grassroots organizing. They have facilitated agency-wide cultural competency trainings and assessments to ensure organizations and governmental entities are able to serve their minority and veteran constituencies effectively and efficiently.

Lindsay received their graduate degree, with a focus in international conflict and countering extremism, and their undergraduate degree, in near-Eastern language and civilization and comparative Islamic studies, from the University of Washington. They also hold an associate degree in Persian-Farsi from Defense Language Institute. Lindsay is a veteran of the U.S. Navy, where they served as a Cryptologic Technician Interpretative.

Prior to founding and leading the Minority Veterans of America, Lindsay served as the Assistant Director and co-founder of Student Veteran Life at the University of Washington. Their previous appointments include LGBTQ Commissioner for the City of Seattle, Co-Chair of Congresswoman Suzan Delbene's (WA-1) Veterans Advisory Council, and they have participated in Armed Forces Academy selection for Congresswoman Pramila Jayapal's (WA-7).

Lindsey Knapp is the Executive Director of Combat Sexual Assault, a nonprofit organization that empowers survivors of Military Sexual Trauma (MST) by helping them overcome barriers to obtaining justice. As an attorney, army veteran, and survivor of sexual assault/domestic violence, Lindsey brings 20 years of professional experience to this field. At Northern Illinois University, Lindsey was responsible for training more than 20,000 incoming freshmen every year on the risks of sexual assault, and the resources available to them. From there, she joined the military where she provided direct advocacy to her brothers and sisters in arms. After leaving service, she continued her work in the civilian sector as a victim advocate on Fort Bragg. But after discovering that the military was systematically covering up rape, she formed Combat Sexual Assault so that she could provide legal counsel to those who were being retaliated against for reporting.

BriGette McCoy is a 2020 Congressional Medal of Honor Community Service Medal recipient and community thought leader. Ms. McCoy engages with technology, academics, business enterprise, and designs virtual Communities of Action to support women veterans of diverse backgrounds. Ms. McCoy is a service-connected disabled veteran who served during the Gulf War Era and founded Women Veteran Social Justice Network, an all-volunteer 501(c)(3). WVSJ Network is a nationally recognized, diverse, and inclusive organization known for honoring past and present military servicewomen and equipping them for advanced leadership in philanthropy, entrepreneurship, civic community engagement for personal economic expansion through professional and peer-connected support. WVSJ Network uses social networks, technology, mentoring, and advocacy to address women veterans' needs and raises awareness of veterans' issues. WVSJ Network is an awarded and recognized organization with a significant body of work in the humanities, therapeutic arts, education, informing policy and research that benefits women of all eras of military service.

Ms. McCoy is a Georgia State University Ph. D. Instructional Technologies student; with earned MS Instructional Design degree and MBA Certificate of Entrepreneurship. She is an alumna of WomenLead, The PhD Project, SREB, IVMF VWISE, and a GSU Veteran Employee Auxiliary Board Student Member. Ms. McCoy is currently a Public Interest Technology Fellow of Georgia Institute of Technology and a 2022 CREATE-X StartUp Launch Fellow developing SilverMoxi, a business brand for diverse second-career entrepreneurs as an improvement to the diversity supply-chain pipeline. She is the proud mom of two daughters who are citizen philanthropists and entrepreneurially engaged and her Aussiepoo pup-in-training Mauxie.

Richard Tedeschi, Ph.D. is Professor Emeritus in the Department of Psychological Science at the University of North Carolina at Charlotte, and Distinguished Chair of the Boulder Crest Institute for Posttraumatic Growth, in Bluemont, Virginia, where he has been one of the developers of programs based on posttraumatic growth principles to help combat veterans and first responders. He has published several books and numerous professional articles on posttraumatic growth, an area of research that he developed while at UNC Charlotte. Dr. Tedeschi serves as a consultant to the American Psychological Association on trauma and resilience, is a Fellow of the Division of Trauma Psychology and the Division of Psychotherapy, and is Past President of the North Carolina Psychological Association.