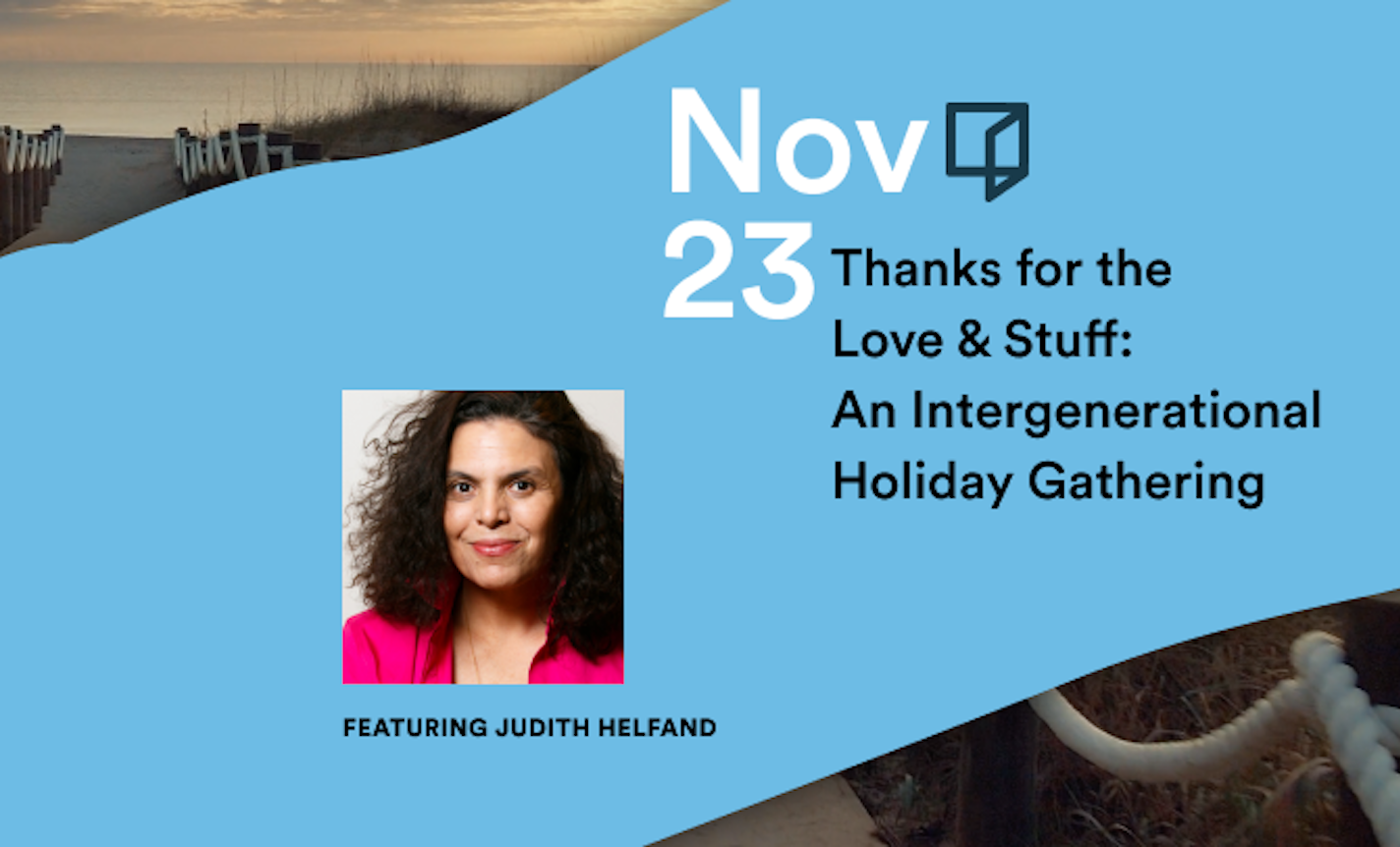 Free
Get ready for your holiday gathering and join this conversation and workshop with Judith Helfand, award-winning director of the feature-length documentary Love & Stuff, premiering on PBS this fall.

“How do you live without your mother?” is the unbearable question Judith asks twice in her film: as a daughter caring for her terminally ill mother and as an “old new mom”, single parenting her much-longed-for adopted baby girl at 50+. With gallows humor and lots of heart, this multigenerational love story ultimately asks: what do we really need to leave our children?

The event will provide an opportunity for everyone to take loving steps towards a “stuff review” in anticipation of Thanksgiving. By assessing objects, clothing, photos, documents, files, and more, we hope to inspire critical conversations about life, death and what we really want to leave our loved ones. This workshop will start with a screening of Judith’s 10-minute New York Times/Op-Doc, followed by a pragmatic and mindful discussion using prompts and writing. Can you start with your grandma’s most cherished ‘tchotchkes’ and use the conversation and connection and stories about the stuff to get to the DNR (do not resuscitate) order? We think so.

Peabody Award-winning filmmaker Judith Helfand is best known for her unique voice as a first-person filmmaker. She has taken on the dark worlds of chemical exposure, corporate malfeasance, environmental injustice, the climate crisis, the long-term impact of structural racism colliding with the politics of disaster and disaster preparedness. In Love & Stuff she delves into deep grief and parenting. Her uncanny gift of marrying dark humor with transparency when addressing serious issues, makes them as personal as they are universal, as resonant as they are entertaining.

Her films include The Uprising of ’34 (co-directed with esteemed veteran George Stoney), her groundbreaking personal film A Healthy Baby Girl, its Sundance award-winning sequel Blue Vinyl, followed by Everything’s Cool (both co-directed with Daniel B. Gold) and her incredibly prescient feature Cooked: Survival By Zip Code which she produced with Kartemquin Films and was broadcast on Independent Lens in 2020. Three of her award-winning films made their world premieres at Sundance, and all have been nationally broadcast on PBS/POV/Independent Lens, HBO, and The Sundance Channel.

A committed field-builder, Helfand co-founded Working Films in 1999, a nonprofit organization dedicated to using nonfiction storytelling to increase civic engagement and promote environmental and racial justice at the local, state, and national levels. In 2005, she co-founded Chicken & Egg Pictures, created to support women documentary filmmakers at critical stages in their careers with creative mentorship and community building matched with strategically timed funding. She now serves as a Senior Creative Consultant and co-runs the (Egg)celerator Lab, a year-long creative mentorship program for first and second time feature documentary directors. As part of her early work at Chicken & Egg Pictures Helfand was a producer on the 2012 Oscar® nominated short The Barber of Birmingham and an executive producer on The Forest for the Trees, Orgasm Inc, Brooklyn Castle, Semper Fi: Ever Faithful. In 1997, Helfand received a Peabody Award for her film A Healthy Baby Girl which had its world premiere at Sundance and was broadcast nationally on POV. In 2002, her film Blue Vinyl -- the "world's first toxic comedy" – had its world premiere at Sundance where it launched a precedent setting multi-year engagement campaign and was nominated for two Emmy Awards.

In 2007, she received a United States Artist Fellowship. In 2016, she was invited to join the Academy of Motion Picture Arts and Sciences Documentary Branch and in 2019, she was awarded the San Francisco Jewish Film Festival’s 2019 Freedom of Expression Award.

She taught documentary production at NYU's Tisch School of the Arts for seven years, was the 2007/2008 Environmental Filmmaker in Residence at UW Madison where she co-created a production class focused on environmental filmmaking and an engagement class built around a local environmental film festival. In 2020, she was the Bob Allison (Allesee) Endowed Chair in Media at Wayne State University’s Department of Communications, part of the adjunct faculty at SVA’s Social Documentary Program, and has just completed a two-year visiting professorship at Columbia University's Journalism School teaching emerging visual journalists. In fact the short film paired with LOVE & STUFF for this broadcast, Call Me Anytime I'm Not Leaving the House, was created in Helfand's Spring class the "Art and craft of documentary, by emerging filmmaker Sanjna Selva.

Deeply committed to mentorship and passing it forward, Helfand is recognized by many in the broadcast documentary field as "one of the best pitch trainers out there" and has done intensive training, program design and moderation for Chicken & Egg Pictures' live/virtual pitch events, The Athena Film Festival's Work-in-Progress Program, The Double Exposure Film Festival's PITCH forum for emerging visual journalists, and has just co-designed and launched the Jewish Film Institute's first ever storytelling intensive/pitching forum, Pitch & Kvell. Helfand is currently working on a range of projects, including the audience engagement campaign that is being launched in step with Love & Stuff, about the importance of processing grief in community with others face to face and heart to heart. She lives in NYC with her daughter Theo (who is now eight) and their pet house bunny Coco Knugel. www.judithhelfand.com