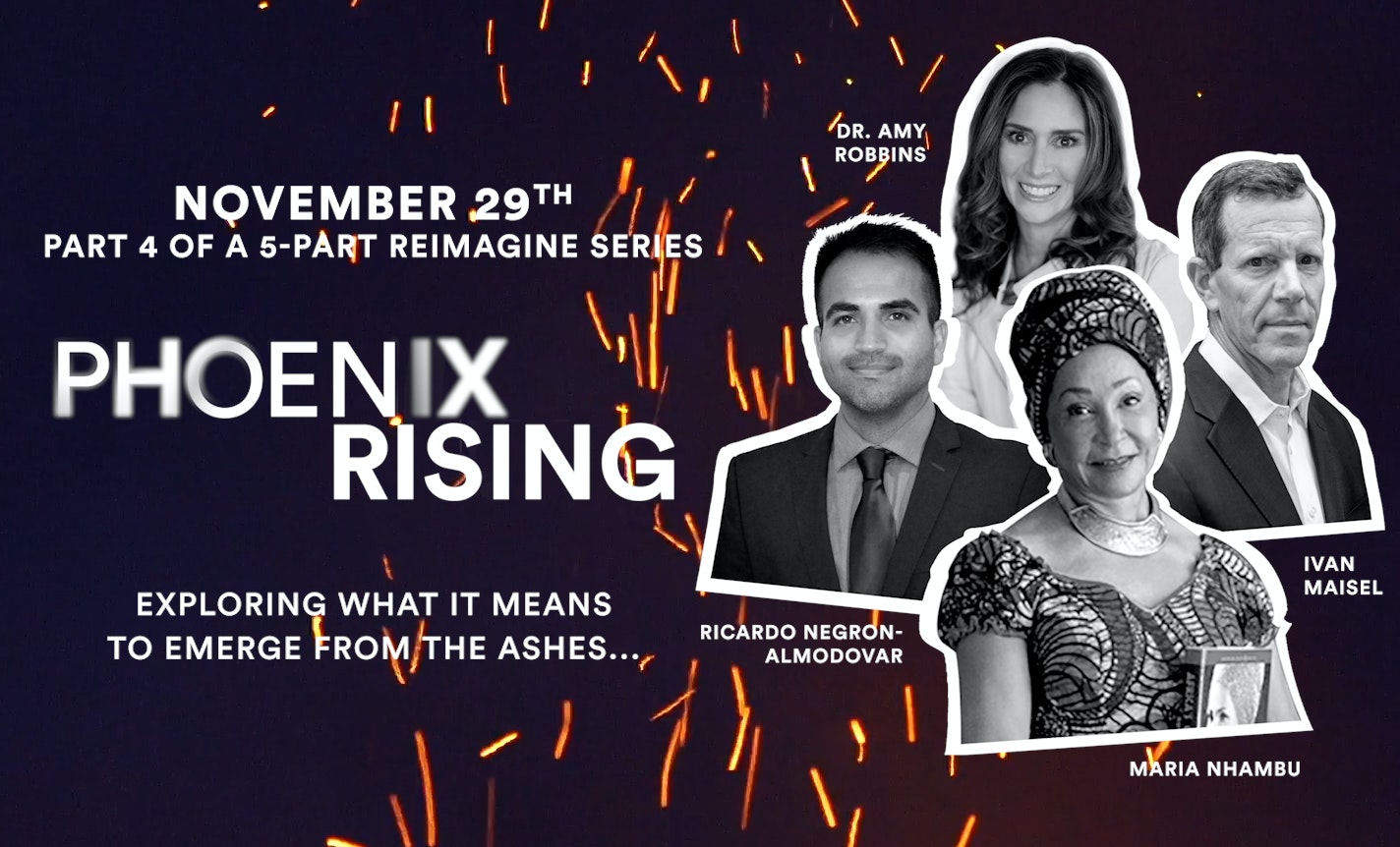 This session features writer Ivan Maisel, advocate/activist Ricardo Negron-Almodovar, and author/movement artist Maria Nhambu in discussion with clinical psychologist Dr. Amy Robbins and Reimagine’s Executive Director Brad Wolfe. Each speaker will share personal experiences of loss--grieving a son’s suicide, surviving the Pulse nightclub massacre of 2016, and overcoming a harrowing childhood in a racist orphanage--and the ways in which they transformed from trauma.

Ivan Maisel is the Vice President/Editorial and Senior Writer at on3.com. He has covered college football for nearly four decades, from 2002-2021 as a senior writer for ESPN, where he wrote for ESPN.com, appearing on television, ESPN Radio and on podcasts. He also served as Editor-at-Large for ESPN College Football 150. Prior to joining ESPN.com, Maisel covered national college football for Sports Illustrated, Newsday, and The Dallas Morning News. He has been honored eight times for Best Story by the Football Writers Association of America, and twice by The Associated Press Sports Editors, which in 2019 named him one of the 10 best sports columnists. Maisel earned a bachelor's degree in American Studies from Stanford University.

Born and raised in Puerto Rico, Ricardo obtained a Master’s Degree in Education, a Juris Doctor and is a licensed attorney in the Island. In 2015, Ricardo moved from Yauco, Puerto Rico to Orlando, Florida. During his first year in Florida, he taught English to adults and became involved in civic engagement efforts to register new voters. Ricardo has worked to empower LGBTQ+ and Latinx communities, focusing on advocacy in support of Hurricane Maria survivors, language access, common sense gun legislation, and the protection of voting rights. Ricardo also obtained a Master’s Degree in Non-Profit Management and helped launch the community organization Del Ambiente, which is an effort led by LGBTQ+ Puerto Ricans to build up the LGBTQ+ Puerto Rican community in Florida. Ricardo currently serves as the Florida Campaign Manager for the voting rights organization All Voting is Local.

Born in Tanzania, East Africa, Nhambu was raised by German nuns at an orphanage for mixed race children. Throughout the hardship and mixed blessings of her childhood, she sustained her spirit through dance and kept alive her dream of further education. She was able to fulfill that goal in the United States, where she attended St. Catherine University in St. Paul, Minnesota, on a full academic scholarship. She graduated in 1967 with honors in French and pursued graduate studies at the University of Maine, Laval University in Quebec, Canada, and the University of Rennes, France. Nhambu taught French in Minneapolis high schools for five years, during which time she reconnected with her African roots and expanded her teaching focus to include her African heritage. She added African Studies and Kiswahili (Swahili) to her high school curriculum and taught a summer course in African Heritage at Macalester College in St. Paul for the Equal Educational Opportunities Program. Along with tutoring both French and Kiswahili extensively, she taught Kiswahili through the University of Minnesota Extension Program, as well as African Dance at the Open U.

As a clinical psychologist, consciousness expert and spiritual intuitive, Dr. Amy Robbins helps humans awaken to life and this can sometimes mean navigating one of life’s biggest challenges: death. While there is tremendous sadness, grief and pain when one suffers a loss, Amy makes death palpable and approachable. She believes that by dissecting death, we can start to live life. Amy received her Bachelor’s of Arts degree in Psychology from the University of Michigan. She received her Master and Doctorate degrees in Clinical Psychology from Illinois School of Professional Psychology. Amy’s trained in community mental health clinics in the Chicagoland area. In addition to her clinical practice, Amy is the Director of Mental Health at BIÂN, a holistic wellness club in Chicago. She also delves into all of the fascinating questions about life, death, consciousness and what it all means with some of the most renowned experts in the field in her podcast, Life, Death, and the Space Between.