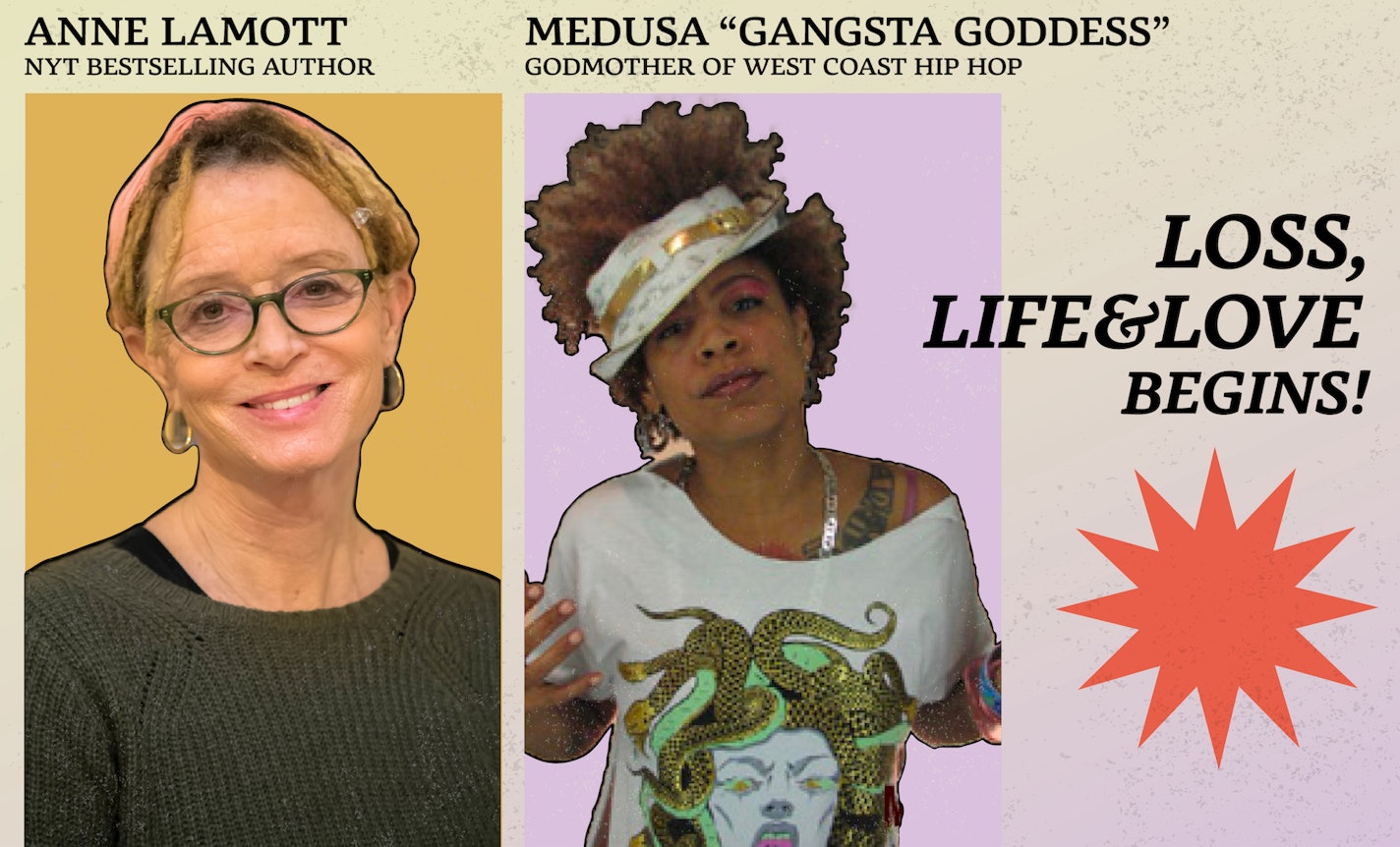 RSVP for your all-access "Loss, Life & Love 3-Day Festival Pass" to attend this event, as well as all the festival's other virtual experiences from Thursday evening through Saturday. If you've already registered, you're in! Spots are limited.

Your sliding-scale donation supports a reciprocal relationship with the Leimert Park community, helping make the in-person experience free for local residents, whose wisdom is being shared prominently throughout the festival.

The Loss, Life & Love festival--both virtual and live from Leimert Park, Los Angeles--is all about surprising yet powerful connections: between life and death, between love and loss, and between people from seemingly different walks of life.

It is with a surprising and powerful connection, then, that this festival shall commence, with a just-announced beginning virtual event.

On Thursday, September 22nd at 5pm PT, Medusa, "the Godmother of West Coast Hip Hop" will join a Zoom call to meet Anne Lamott, revered author described by the NYTimes as the "lefty guru of optimism." You're invited in online to be part of what unfolds. The meeting with guided by two equally powerful and unique voices: Poet Mahogany L. Browne and Rabbi Sydney Mintz.

On the surface we could look at this main pairing as a dialogue between two artistic powerhouses who couldn’t be more different: a conversation between a rapper and a writer, a black woman and a white woman, someone from South Los Angeles, another from Marin County Bay Area.

But what happens when we go deeper and explore hard questions, the questions that unite us all despite where we are from, the color of our skin, or our belief systems?

What does it take to go through the challenging parts of life and come out stronger? How do we access our truest creativity? How might death inspire life? How might loss fuel love?

Together, Anne Lamott, Medusa, Mahogany L. Browne and Rabbi Sydney Mintz will explore the peaks and valleys of it all, weaving tales that help us share in a sense that somehow we're connected by something bigger than any of us.

Anne Lamott, longtime Reimagine collaborator and New York Times bestselling author, speaks and writes about subjects that begin with capital letters: Alcoholism, Motherhood, and, for this event, Death. Laugh-out-loud funny and ruthlessly honest, she writes about loss–loss of loved ones and loss of personal control. She wrote her first novel for her father, the writer Kenneth Lamott, when he was diagnosed with brain cancer. She has said that the book was “a present to someone I loved who was going to die.”

Medusa, often dubbed “the Angela Davis of Rap,” will be performing throughout the Loss, Life & Love festival. Medusa has shared the stage with lyrical heavyweights such as Stevie Wonder, Erykah Badu, Fishbone, and others. She received a Grammy with the band Ozomatli and LA Weekly voted Medusa “Best Hip Hop Artist” two years in a row.

Mahogany L. Browne, selected as Kennedy Center’s Next 50, is the Executive Director of JustMedia, a media literacy initiative with a focus on the criminal legal system, and is informed by her career as a writer, organizer, & educator. Browne has received fellowships from Art for Justice Fund, Air Serenbe, Cave Canem, Poets House, Mellon Research & Rauschenberg. She is the author of recent works: Vinyl Moon, Chlorine Sky, Woke: A Young Poets Call to Justice, Woke Baby, Black Girl Magic & book-length poem: I Remember Death By Its Proximity to What I Love. She is the founder of Woke Baby Book Fair, a traveling diverse reading campaign, and is the first-ever poet-in-residence at the Lincoln Center and lives in Brooklyn, NY.

Rabbi Sydney Mintz was ordained in 1997 by the Hebrew Union College-Jewish Institute of Religion in New York City. She is the founder of the award-winning Late Shabbat Young Adult Program at Congregation Emanu-El where she has served as Rabbi for the past 22 years. Rabbi Mintz became a Senior Rabbinic Fellow at the Shalom Hartman Institute in Jerusalem in 2004 and serves on the National Board of Bend the Arc: A Jewish Partnership for Justice. She serves on the 360Advisory Council of the Reimagine End of Life Festival. In 2018, Rabbi Mintz’s one-woman show “You May Think I’m Funny, But It’s Not” premiered and sold out at the Marsh Theatre in San Francisco.