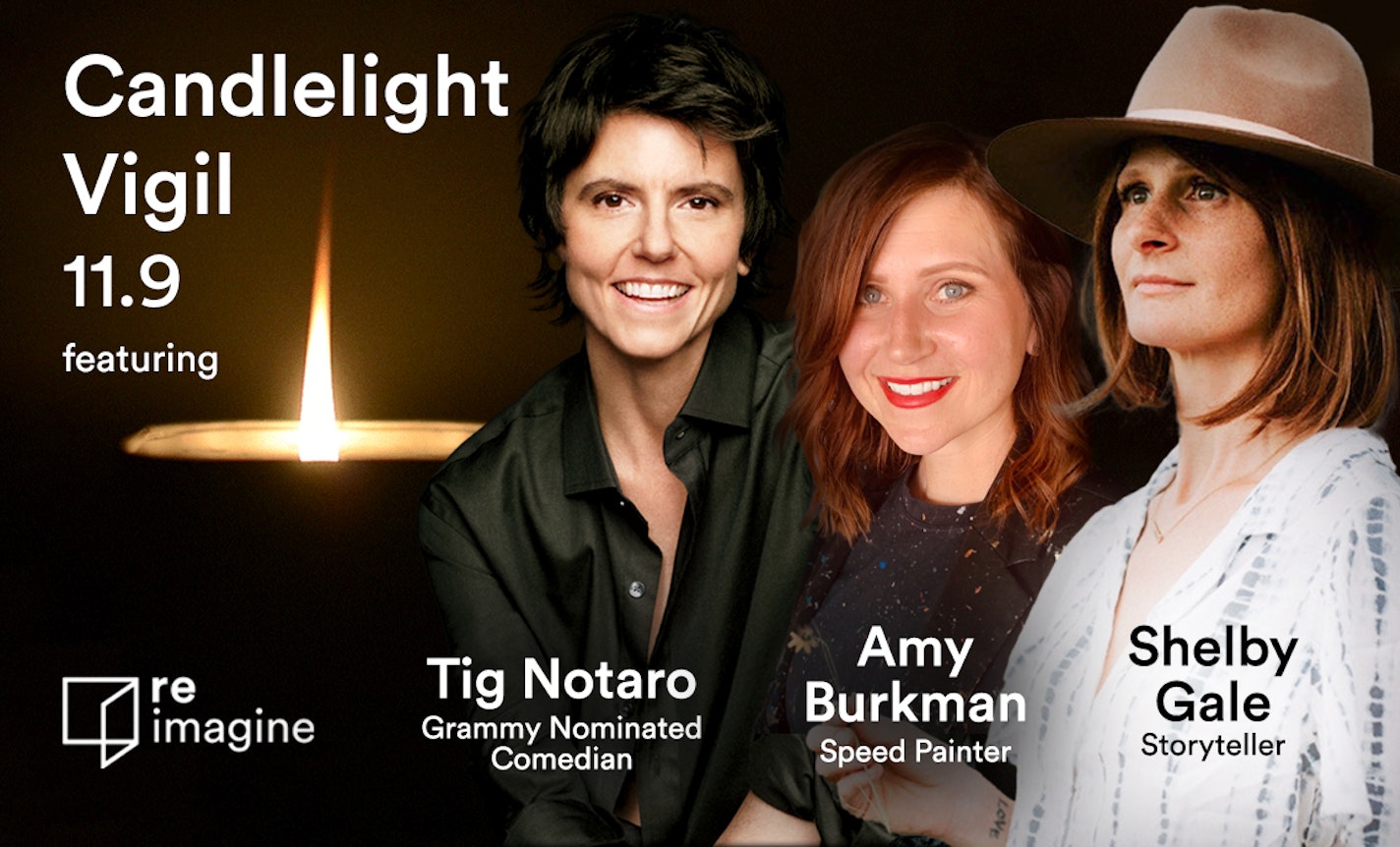 Grab a candle and join us for our monthly candlelight vigil to honor all that we have lost in 2020. November 9 marks the 9-month anniversary since the first reported death from COVID-19 in January.

We will be joined by Grammy Nominated comedian Tig Notaro, alongside renowned speed-painter Amy Burkman and their dear friend and storyteller, Shelby Gale, who is currently undergoing treatment for cancer.

As cancer survivors themselves, Tig and Amy are participating to create a sacred space full of self-expression, and also to raise money for Shelby’s ongoing treatment. You will have the chance to walk away with a beautiful piece of Amy’s live speed-painted art to support Shelby’s journey.

This will be an evening of self-expression, humor, grief, love, and hope.

The vigil ceremony will be led by Reimagine board member, the incredible Pastor Corey Kennard, and hosted by musician and Reimagine Founder, Brad Wolfe.

Tig Notaro is a groundbreaking stand-up comedian, actor, writer, producer, and director originally from Mississippi. Hailed for her effortless storytelling and fearless stage presence, her subject matter ranges from the delightfully absurd to the monumentally serious. Rolling Stone recently named Tig “one of the 50 best stand-up comics of all time.”

This year, Tig and her wife/writing partner Stephanie Allynne sold the screenplay "First Ladies to Netflix with Jennifer Aniston attached to star as the first female President of the United States, and Tig starring as the First Lady. In 2019 Tig will also appear opposite Oscar Award winner Octavia Spencer in the Paramount Pictures comedy "Instant Family."

For two seasons, Tig wrote, produced, and starred in the critically acclaimed semi-autobiographical Amazon series "One Mississippi," which she co-created with Oscar Award winner Diablo Cody. The series yielded several award nominations, including WGA, GLAAD, and The Critic’s Choice Awards.

In 2013, Tig was nominated for a Grammy Award for her sophomore release, "Live," the number one selling comedy album of 2012. Tig was also nominated for both an Emmy Award and a Grammy Award for her 2015 HBO special "Boyish Girl Interrupted." She received a GLAAD Award nomination for the Netflix Original Documentary "Tig." Her memoir, "I’m Just a Person," is a New York Times Bestseller.

As a commissioned artist, Amy maintains a comprehensive portfolio that includes personal portraits, pet portraits, landscape and realism pieces, as well as caricatures and abstract imagery. Although she takes pride in her personal artwork, commissioned pieces, and live art performances, above all she strives to utilize her creative passions to help others.

Her travels to West Africa have inspired her to start the program “Educate Through Art” through which she completed numerous educational murals for the Senegalese and Malian communities with a focus on nutrition, pre- and post-natal health care, and various health-related topics. In addition to the successful implementation of Educate Through Art, she witnessed first-hand the magnificence of sub-Saharan African fauna and developed a sincere appreciation and respect for the animals of the region.

Upon her return home and inspired by her experiences abroad, she began performing speed art in support of endangered species. As a result, she has performed various educational and conservation-based speed paintings domestically, and internationally for audiences in Mexico, China and West Africa.

Through her love of travel and philanthropy, she continues to seek opportunities to apply her knowledge, artistic abilities and interest in aiding the global conservation effort. Dedicating her creative energy to charitable causes fulfills her passion for humanitarian work, animal relief efforts, environmental conservation and education through creative communication.

Learn more about Shelby Gale’s journey and how you can support this incredible woman in her recovery: https://www.gofundme.com/f/shelbyshope4cancer