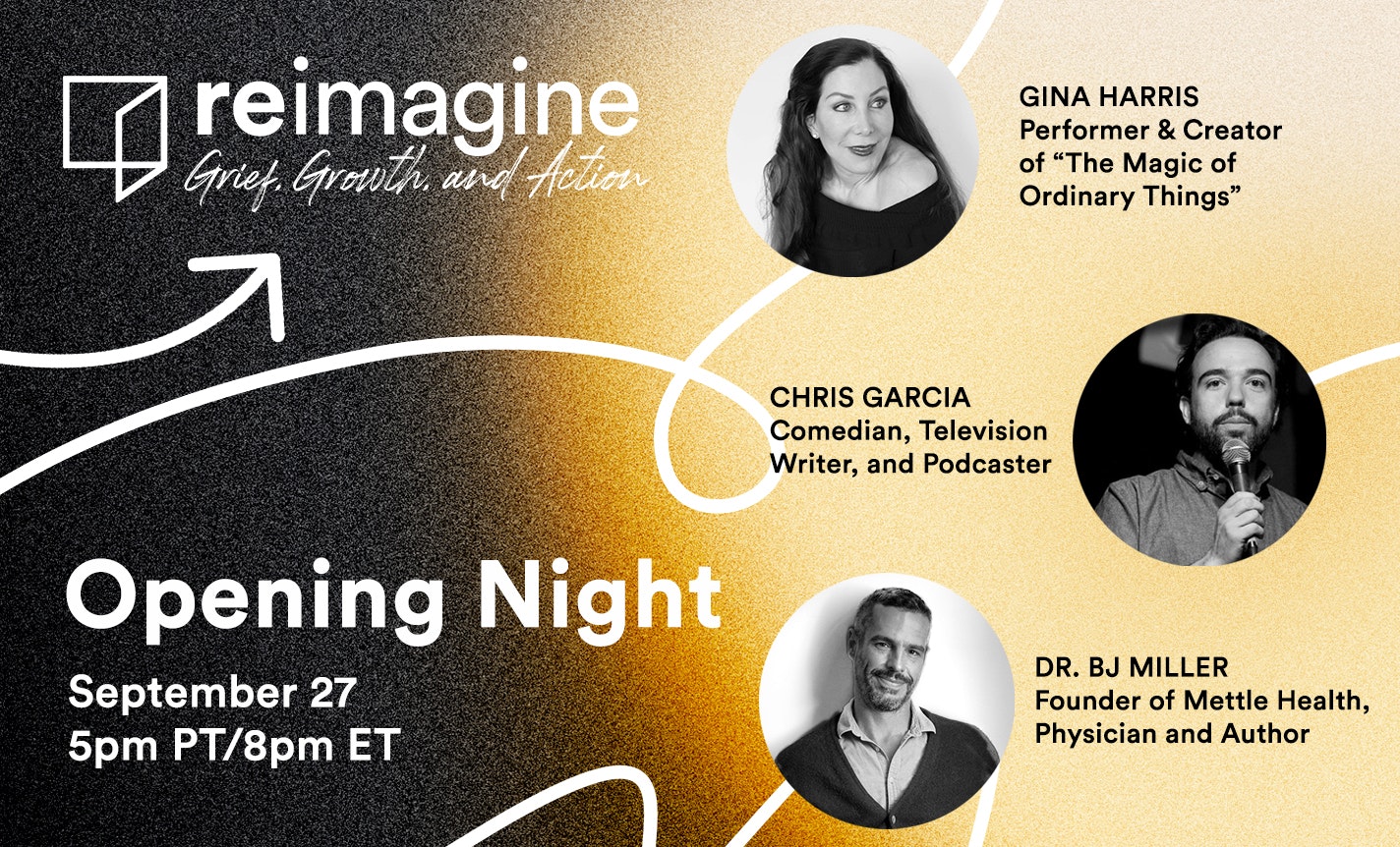 Join Dr. BJ Miller, musician Gina Harris, & comedian Chris Garcia, for an evening about how facing the hard parts of life, together, can transform adversities into meaningful growth.

This Fall, the Reimagine community is going to begin a new journey together, a journey into what it means to take small steps and grow from our grief.

On both an individual and collective level, sometimes it feels like the hard stuff comes at us fast and furious. This has certainly been one of those periods. There’s so much we’ve lost along the way, from loved ones, to friends, to relationships, to jobs, to a sense of togetherness, to the way of life we used to know. We feel loss, and we feel lost, with much to grieve. But we shouldn’t turn away. We believe that beautiful things can come from the hardest places.

We hope you can join us for this important conversation!

Dr. BJ Miller is a hospice and palliative medicine physician, speaker, and author. He is the co-author of A Beginner's Guide to the End: Practical Advice for Living Life and Facing Death. He is also founder of Mettle Health.

Gina Harris is a singer/songwriter and actor who has performed in theaters and jazz clubs in New York, Los Angeles, and San Francisco. A protégé of Columbia Recording Artist, Lilian Loran, and a veteran of the Groundlings; Gina had a lead role in Peter Ustinov’s Broadway and national touring productions of Beethoven’s Tenth.

“The Magic of Ordinary Things” came to Gina in a series of dreams and recovered memories after the deaths of her parents and beloved singing teacher. It provided a glimmer of hope in a dark time when she thought her life was over. The show is an audio drama in seven acts; a musical memoir, a theatre piece, a tale that spans 43 years, two parents, a singing teacher, and a lonesome cowboy named Deets. It tells of how moments missed and things once taken for granted become the stepping stones to a new life – even when things seem hopeless.

Everyone you miss is waiting inside you.

Chris Garcia is a comedian, television writer, actor, and podcaster from Los Angeles. You may have seen him tell his jokes on his very own half hour special on Comedy Central, The Late Late Show With James Corden, This Is Not Happening, Adam Devine’s House Party, and @Midnight. Chris was named a New Face at the 2016 Montreal Just For Laughs Comedy Festival and a “Comedian You Should and Will Know” by Vulture. He has written for Comedy Central, Adult Swim, Broadway Video, and is currently writing and acting on Mr. Iglesias on Netflix. He’s been a guest on memorable podcast episodes of This American Life, WTF with Marc Maron, and 2 Dope Queens. Chris’s podcast “Scattered,” was named one of the “10 Best Podcasts of 2019” by Time Magazine.