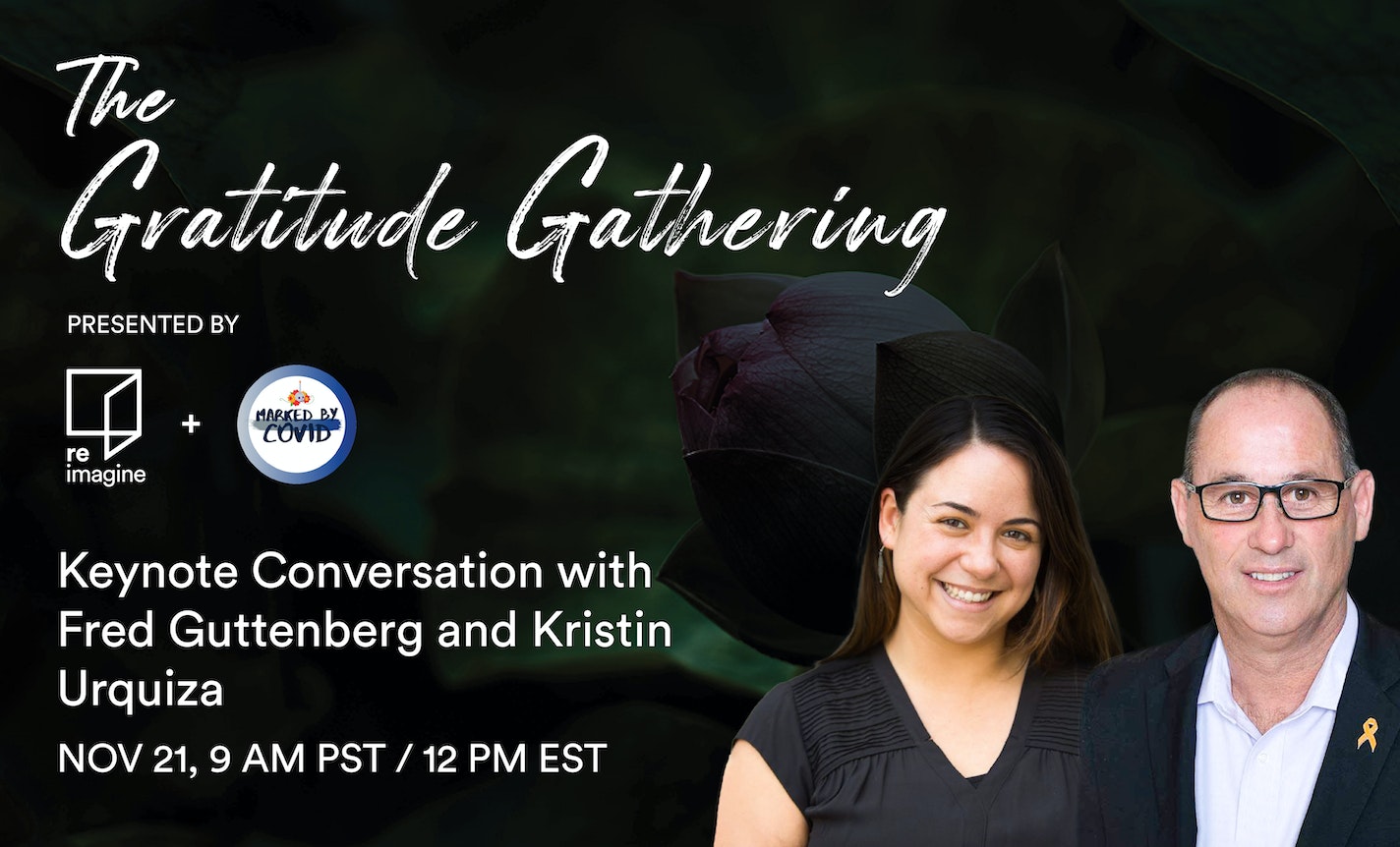 Join author Fred Guttenberg and activist Kristin Urquiza in a conversation about their grief journeys, and insights as to how one can find meaning, hope, and gratitude in the midst of pain.

NOTE: This keynote conversation is part of The Gratitude Gathering Retreat, which starts the evening of Nov. 20.

To register for the keynote conversation: click “RSVP”, and you will be redirected to The Gratitude Gathering Retreat Registration page.

Join author and activist, Fred Guttenberg and Marked by COVID's founder, Kristin Urquiza, in an intimate conversation about their grief journeys. Fred and Kristin have both experienced catastrophic losses that led them to "find the helpers" as well as become helpers and activists in their communities.

Fred Guttenberg’s professional life includes over a decade of experience in sales and management with Johnson and Johnson, followed by almost 15 years as an entrepreneur, having built a business that consisted of 19 Dunkin Donuts, which he sold in November 2016. Fred was hoping to take some time to relax before figuring out his next endeavor. Then tragedy struck.

Fred’s brother Michael, one of the original first responders during 9/11 at the WTC with a team of doctors got trapped in the WTC as it collapsed. Amazingly, the room that they hid out in did not collapse and Michael and his team of physicians spent 16 days at ground zero taking care of others. As a result of the ground zero exposure, Michael was diagnosed with pancreatic cancer which he battled, along with Fred’s help and support until October 2017, when he passed away.

Following Michael’s funeral, Fred understandably still trying to recover from the passing of his brother also recognized he needed something else to do. In February of 2018 he was actively looking for a new purpose when Fred and his family were again struck by another National American tragedy; only this one was far worse. His 14-year-old daughter Jaime, a freshman at Marjory Stone Douglas High School was one of 17 victims brutally murdered in the Parkland Florida school shooting.

From that day forward, Fred’s life would be forever changed. While grieving, Fred found himself unable to stand still. The day after the murder, he attended a vigil and while there was asked to speak. That was the start of a new public life for Fred. He was angry and quickly realized his new purpose as an American advocate in the fight for common sense gun safety.

Fred and his wife Jennifer now spends time challenging our elected officials to do more and is aggressively pursuing strategies to break the grip that the gun lobby has on our elected officials through their non profit organization dedicated to Jaime’s life called “Orange Ribbons for Jaime.” He has been a regular on TV news programs and myriad of online and print media. Through the formation of the non-profit, this is now his full time mission.

His recent book, Find the Helpers: What 9/11 and Parkland Taught Me About Recovery, Purpose, and Hope tells the story of Fred's journey since Jaime’s death and how he has been able to get through the worst of times thanks to the kindness and compassion of others. Good things happen to good people at the hands of other good people ─ and the world is filled with them. They include everyone from amazing gun violence survivors Fred has met around the country to former VP Joe Biden, who spent time talking to him about finding mission and purpose in learning to grieve.

Fred Guttenberg loved watching Mr. Rogers with his daughter and son when they were little. Their favorite wisdom was: In the midst of tragedy and catastrophe, find the helpers.

Kristin Urquiza is the Co-Founder and Chief Activist of Marked by COVID. She is a graduate of Yale University and UC Berkeley’s Goldman School of Public Policy where she has a Master of Public Affairs. She is an environmental advocate at Mighty Earth, where she works to hold corporations like Cargill accountable to their industrial agricultural practices that displace indigenous people from their lands and drive deforestation in places like the Amazon rainforest and beyond. Additionally, Kristin works closely with Liberation in a Generation, a group working to narrow the wealth gap between people of color and white families in the United States within a generation.

Her grandparents were migrant farmworkers– from Mexico and Oklahoma — and her father worked in the fields as a child. She grew up in the Maryvale community of Phoenix, and is a proud product of public primary education and the first person in her family to go to college. Maryvale is a community of predominantly people of color and immigrants, and is now seeing the highest rates of COVID-19 in the nation, where people are waiting 13 hours to be tested.

Kristin’s parents contracted COVID-19 in June, following Governor Ducey’s downplay of the severity of the coronavirus and subsequent rollback of the state’s shelter-in-place ordinance. When her dad passed on June 30 from COVID-19 she launched Marked by COVID to honor her father, collect stories of people who have been impacted by COVID-19, and inspire safer public health policies. With the help of friends and family, she wrote the first #HonestObit, invited the governor to her dad’s funeral, and held a vigil at the state capitol. For more information about Kristin and Marked by COVID visit: https://markedbycovid.com.